Who We Serve - UOSSM International

UOSSM's life-saving services benefits well over a million people through its emergency medical response, health care services, and other programs throughout Syria and beyond. Many of them are in the most vulnerable target populations, including women & children, and in difficult-to-reach geographic areas.

Some of these individuals and their stories are briefly shared below:

Ghaith is five years old. He injured his foot and was unable to go to a medical facility to get attention for his injury, until UOSSM's mobile clinic reached Shayah Farms, where he lived. People in Shayah Farms have major difficulties accessing medical facilities because the area is nestled in valleys and hills and there is no major paved road.

Syria's geography includes many hard to reach areas and if not for the mobile clinics in UOSSM's primary health care program, many residents in these areas would be suffering terribly. 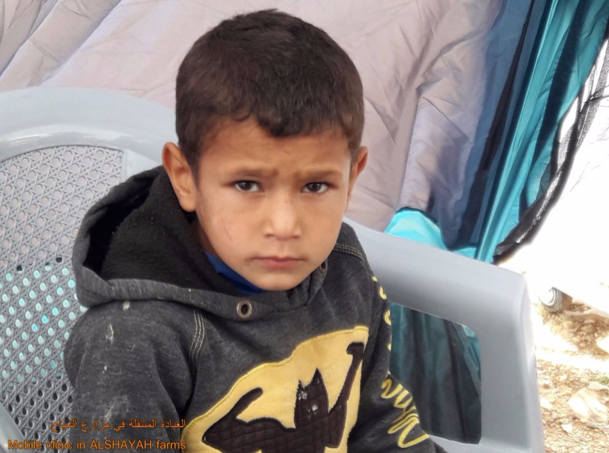 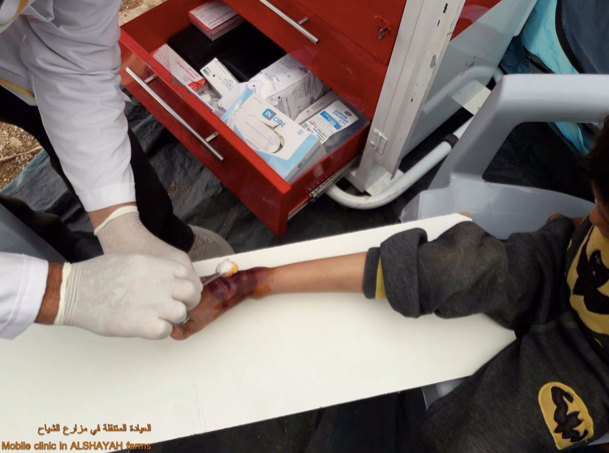 Ghaith was seen by the doctor. His foot was treated and bandaged, and he received medicine to help ease the pain and fight infection.

Amani is only five years old and doesn't even know what a normal life is. All she has known her entire young life is war...bombs...hunger and fear, and yet she has the ability to smile. 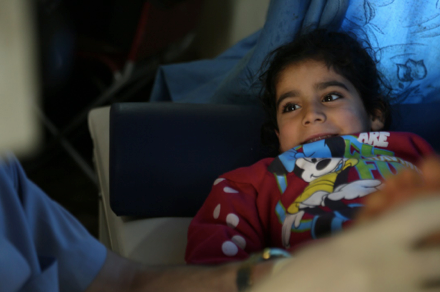 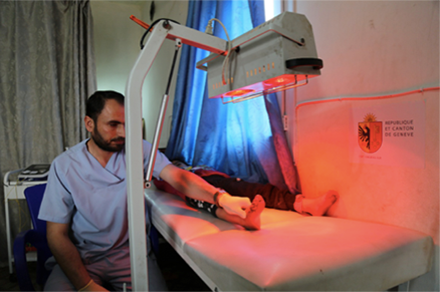 Amani had one of her toes amputated due to an injury from an airstrike. Her toe might have been saved had she not lived in a besieged area with very limited access to healthcare. Forced out of Ghouta, her hometown, UOSSM found Amani and helped treat her condition.

The peroneal nerve on her lower leg was damaged from shrapnel, which led to foot drop, a condition caused by weakness or paralysis of the muscles that lift the front part of the foot. UOSSM doctors did what they could to save her foot, but unfortunately one of her toes had to be amputated.

Amani was referred to the Sarmada Rehabilitation Center. With three physical therapy sessions a week, she regained her strength and overall physical condition; and adjusted to walking with one less toe.

The war has made a terrible impact on the children of Syria, psychologically, socially, mentally and physically. Fatooma was one of those children…

11-year old Fatooma was suffering physically and mentally. She had difficulty balancing, possessed low self-esteem, would not go to school, and faced socializing challenges.

UOSSM’s local mental health team visited her at home to thoroughly evaluate her.

With parental permission, Fatooma was placed in a Friends of Children Center. A full treatment plan, including mental, social, and educational support, was established for Fatooma. 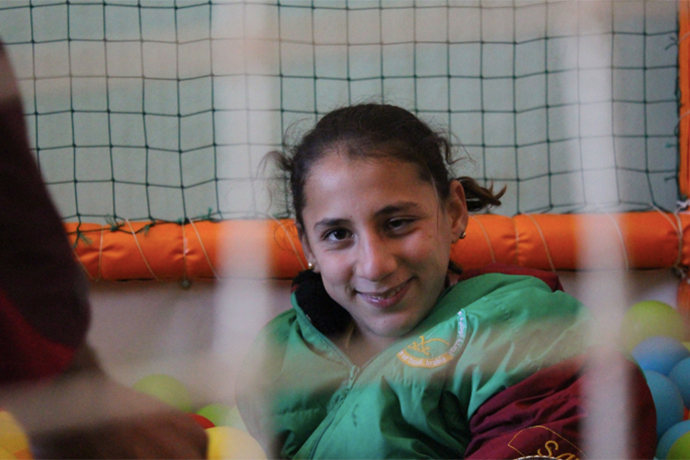 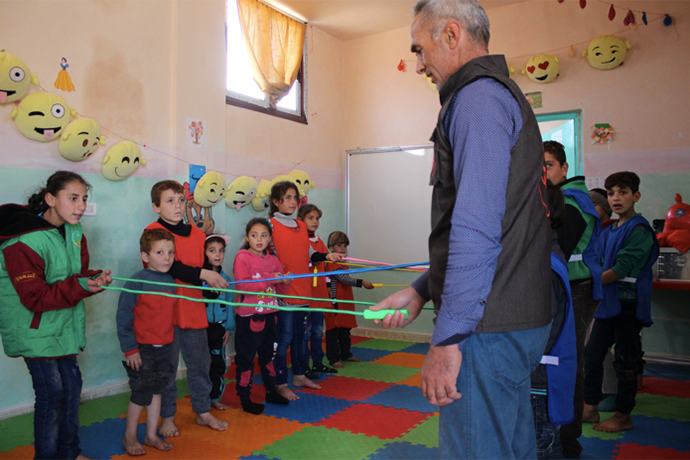 Since enrolling in the center, Fatooma is learning to read and write, and has regained some self-esteem. She is also learning to regain balance while walking. UOSSM's Friends of Children team helped her regain her life and bring a smile back. 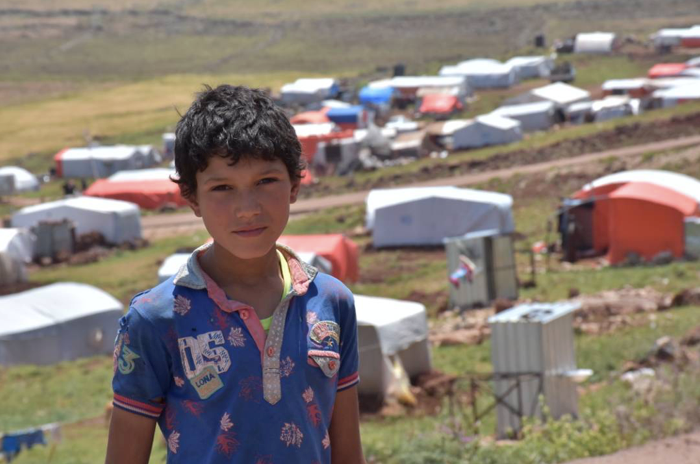 Children all over the world complain about going to school. Khaled was likely one of them. Then, one fateful day, Khaled’s school was bombed while in session. Khaled survived but the scars of fear were so deep he never went back to school again.

Khaled and his family also had to abandon their home and flee for their lives after the area came under bombardment. They have now been displaced for two years.

UOSSM Protection Services found Khaled and helped him cope with his fears. After several sessions, Khaled finally built up the courage to go back to school. Now he says he wants to be an engineer and make a difference in the world.

You never know what you have until it is taken from you.

To learn more about UOSSM's Protection program, click below.

Hanan has already been through so much at the tender age of 2...she has felt the pains of war since she was born. She knows what it feels like to travel for a whole month just to find a safe shelter to live...the struggle is real, and her pain is real. Her tiny body was neglected as she was forced to endure the kind of suffering no child should ever have to experience.

UOSSM's Psychosocial Support team visited and examined Hanan which showed that the sweet baby was suffering from extreme malnutrition. 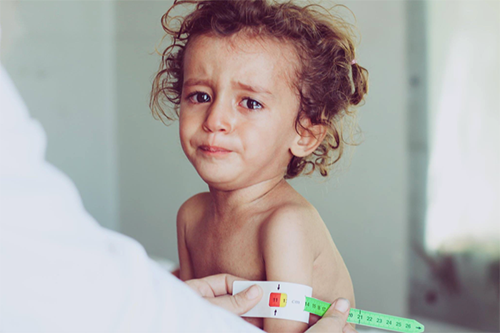 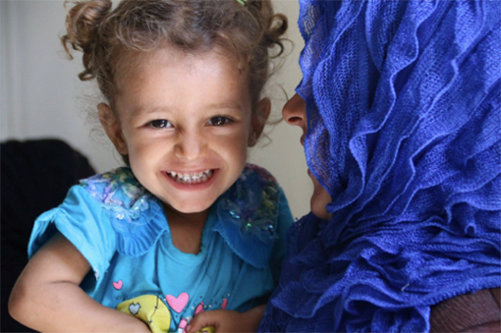 She was immediately admitted to UOSSM's Primary Health Care Center in Jisr Al-Shaghoor. Hanan weighed only 8 kilograms and was only 79 centimeters tall. The young toddler was provided with medications, nutritional supplements and iron. Hanan also needed to continuously follow up with the doctor once a week.

Hanan has been under UOSSM's care and we are happy to report that she has gained some weight and the level of malnutrition has decreased. She is getting stronger by the day.

Hanan’s story was told. There are thousands of untold stories of the children of Syria, these children have paid the ultimate price for the brutal war.

To learn more about how UOSSM is helping treat malnutrition cases please click below. 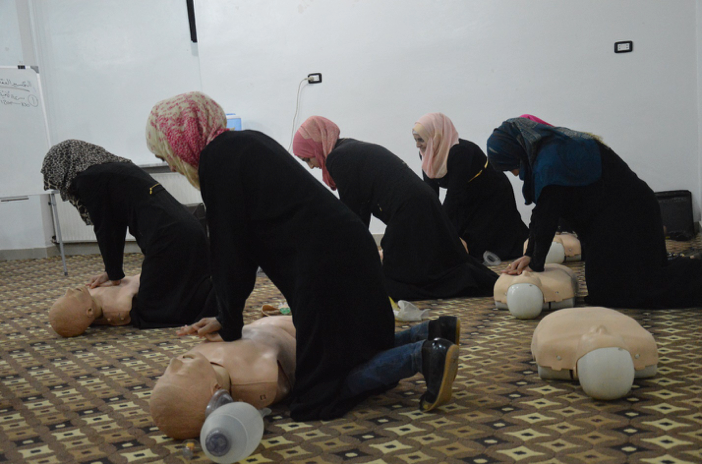 Hanan recognized the desperate need for medical staff throughout Syria and decided she wanted to become a nurse to help make a positive impact.

Hanan’s journey began in the UOSSM Rehabilitation and Training Center. She attended a training course “Emergency Management of the Wounded in Times of War”. The three-day course not only provided Hanan with practical professional skills, but helped save a family member's life.

One day, Hanan’s nephew fell and hurt his head. Hanan instinctively implemented her training, provided first aid and took her nephew to the hospital, ultimately saving his life.

The war in Syria has caused the virtual collapse of its healthcare system. Hospitals and medical facilities have been destroyed; while the detention of medical staff has prompted many healthcare professionals to flee Syria in fear for their lives. This severe loss of the medical care skills base comes at a time when its need is greatest in Syria. UOSSM's Training program helps reverse that imbalance, providing individuals with knowledge & hope; and the society at large with the critical skilled labor needed to heal itself. To learn more about UOSSM's Training program, click below.