Syrian Health Care Research Methodology. The surveying process was conducted over a three-­‐month period in 3 phases: 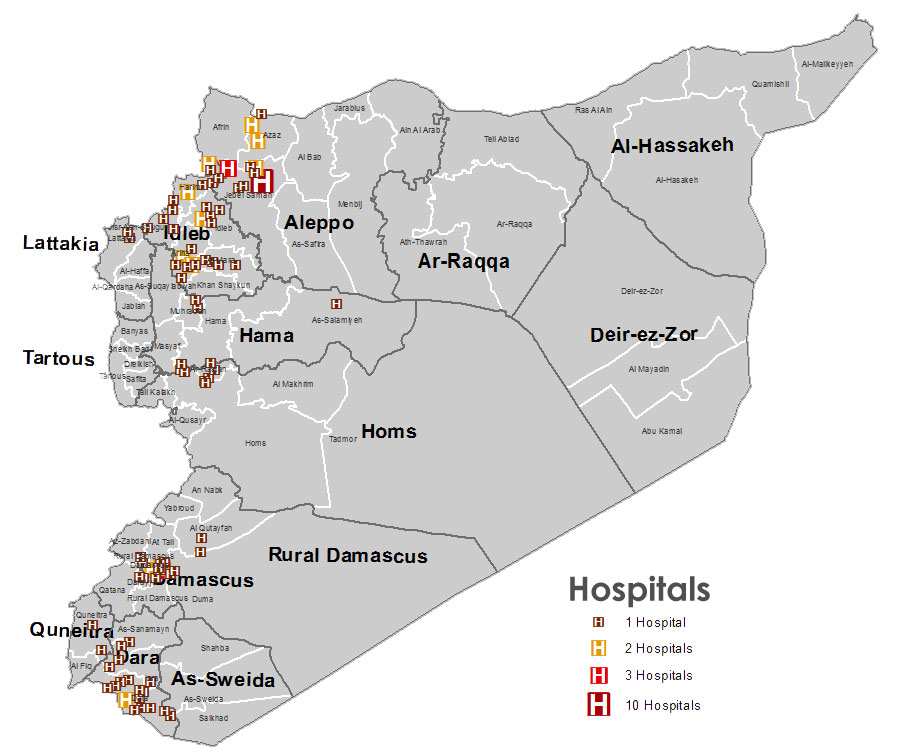 Phase I: Preparation of the Survey Questionnaire (One-­‐month)

A. Type of Services provided:
Services have been classified as surgical and non-­‐surgical emergencies, emergency and elective surgeries, intensive care units of all kinds, and surgical and non-­‐surgical services according to what is available at the prospective hospitals. In addition, support services, such as hemodialysis, physiotherapy and laboratory, were identified when available.

B. Available Devices and equipment in the Hospital and their Current Functional Conditions:

Devices were classified according to the different departments or sections at the hospital, with a special focus on their number and functional status.

5. Common devices or devices that could be used in more than one departments (Suction, Monitor, Ambulance, Oxygen concentrator, Oxygen generator, Electric generator)

1. Number of patients at the emergency department and clinics

2. Number of emergency and non-­‐emergency admissions

3. Number of surgical procedures of all kinds according to terms of reference

4. Total number of patient-­‐hospital days and occupation rates in each section

D. Financial Support of the Hospital Support has been classified into three categories:

Answers were classified into: Full support, partial support, and no-­‐support.

We only included medical staff in the survey, without counting for other administrative staff at the hospital. Medical personnel are classified into:

1. Doctors, whether they are specialists or residents

2. Technicians, whether they hold diplomas or experience certificates

A) The proposed questions have been entered into a special account for scientific  research in KoBo Toolbox platform.
B) The questions have been checked and reviewed by the specialist team.
C) Training has been provided to the team and the enumerators, with regards to the questionnaire and on how to use the program on a laptop or smart devices. Enumerators of the Northern region have been trained at the Medical Training Center at Bab Al-­‐Hawa Hospital. However, the enumerators of the Central and Southern regions have been trained through Skype conferences.

D) A sample standardized survey questionnaire was distributed to 15 hospitals in different regions, as a pilot test. After reviewing the filled surveys, further modifications and revisions were done on the test questionnaire.

PHASE II: Conducting the Survey (One-­‐month duration)
Starting the complete survey questionnaire at the hospitals that were accessible

in all the three regions, followed by auditing the collected data, which took place at three levels:

a. First level: Full audit of the collected data by the Governorate officers in the Northern region and/ or the Central and Southern Regional Directors

b. Second level: A randomly selected sample audited by the Regional Directors.

After the completion of the research survey, the project was ended and the collected data were imported to an Excel file.

2-­‐ Coding the data on SPSS, along with setting the variables, reaching to 505 variables

3-­‐ Data Analysis using Excel and SPSS A descriptive statistical analysis has been conducted on all data. The data are illustrated it in the different tables in this report and are classified into groups for comparisons at the hospital, provincial and regional levels.

The survey results were studied at four levels:

1. Overview of the hospitals medical status in Syria at large

2. At the governorate level in terms of hospitals distribution and services with regards to the besieged areas as one comprehensive community

3. At the hospital level, through a descriptive display of the status of the hospital, its infrastructure, availability of services, and the volume of its work. We issued a data card for each hospital on silk.co website, with private access

A comparison between this survey and the previous survey, which was introduced in April 2015, in terms of:

2. Numbers of facilities: We surveyed 113 hospitals in this survey, while it was only 90 hospitals in April survey. 3. The results of the survey: Focusing on the number of medical staff, in addition to the medical services provided, helped avoiding as much as possible false duplication in the number of staff, which occurred in the previous survey.

The difference between this survey and HeRAMS:

1. This survey was based on direct visits of the enumerators to the hospitals, where the questionnaires were filled directly by the hospital directors or the hospital staff in charge of hospital data and information. While, HeRAMS relies on the NGOs in filling the questionnaire, which generates a gap in data accuracy, and lacks the ability to gather data from hospitals that are not supported by NGOs.

2. The survey examined, more in-­‐depth, different aspects of medical services that had not been previously addressed; such as including the number of medical staff, work volume in hospitals of all specialties, and days of bed occupancy to calculate occupation rates.

3. The survey focused on hospitals only, rather than including other health care centers, to get the most accurate data.

4. The survey included collection of data on essential supportive services, such as blood banks, dialysis and physiotherapy services, available at hospitals. Additional separate questionnaire, for such services outside hospitals will be conducted later on.

5. The survey highlighted the besieged areas and considered it as one demographic unit, in order to assess its available health care services.