Multiple airstrikes targeted a busy marketplace today in Maarat Al Nouman, Idlib, from 8:36-9:00 a.m. Damascus time, killing at least 37 people. Many of the victims were women and children. Among those killed was a Syrian Civil Defense volunteer (White Helmets) as he was working to save victims of the first attack (known as a 'double tap' attack). Those numbers are expected to rise as bodies are still being pulled from under the rubble. At least 73 civilians have been killed and over 110 were wounded in the past two days in North West Syria as the bombardment continues. Among those killed, two were Syrian Civil Defense Workers (White Helmets), and one was a hospital guard. 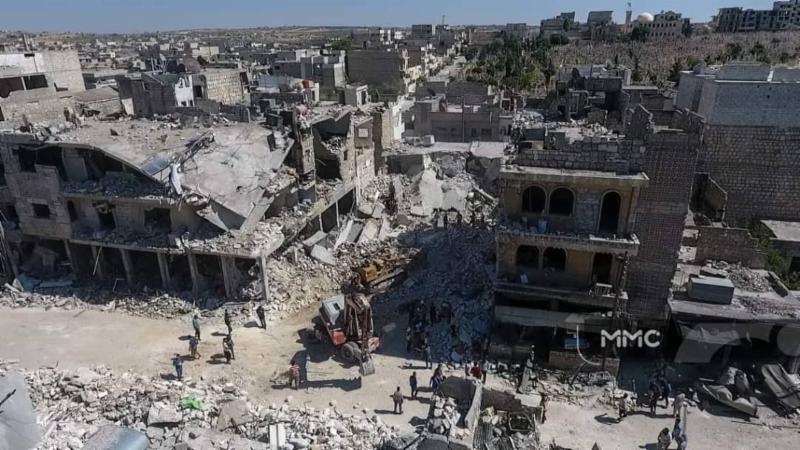 The bombardment continues to wreak havoc on the 3.5 million civilians of Idlb. Since April 28, at least 637 civilians have been killed, and over 1497 have been wounded. Among them, 22 humanitarian workers were killed and 29 wounded. At least 34 medical facilities were targeted, and it is estimated that the displaced have reached half a million people. Large numbers of the displaced are women and children, with nowhere to go. The situation is dire and continues to worsen by the day. In addition, eight water supply facilities have been damaged in northwest Syria, affecting 25,000 people according to UNICEF.
UOSSM condemns attacks on civilian areas and calls on the international community to put a stop to these attacks immediatly.
"Airstrikes are flattening civilian areas of Idlib and spreading terror throughout the region. There is nowhere for civilians to hide, and nearly 500,000 have now become IDPs. The victims of these attacks are often women and children. There can be no excuses, these attacks are clear war crimes and must stop."- Said Dr. Hussam Al Fakir, Chairman of UOSSM International
Do you like this post?
Tweet